As a well-known enterprise in the industry, Wanhe's productivity guarantee can be said to be the most important. The traditional riveting station production is very cumbersome. The left hand puts the nail, the right hand takes the gun, puts the nail and nails, the efficiency often can't keep up, it is not easy. Aligned with the hole, so the rivet also lost a lot. Later, after the company personnel finally learned about the fly-effect automatic nail puller, our test machine personnel took the equipment to the test machine. After comparison, the same product, the same product Not only completed production in advance, but also saved some workers, production management said: "I have known this product before, first understand foreign, but the foreign unit price is obviously very high, and finally know that there are such equipment in the country, I am very surprised. So I did not hesitate to come to the test machine, the effect is very good, the employees like it." 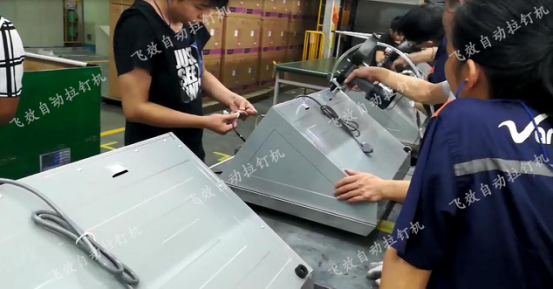 The hood is fastened with blind rivets. The fly-effect automatic rivet machine automatically arranges and separates the rivets by means of the machine, and uses compressed air as the power to automatically transport the rivets through the pipe to the nipper nozzle. It is an automated version of the traditional rivet gun, which solves the fastening problem for enterprises.
In the future, Guangdong Wanhe Group Co., Ltd. will further introduce the fly-effect automatic nailing machine to further solve the problem of the loss of the number of rivets, the cumbersome work of employees, and the low efficiency. We look forward to further providing the best service.